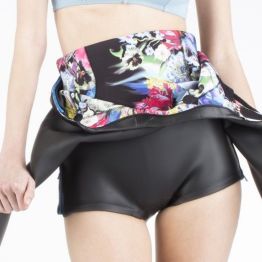 Cynthia Rowley is the Holly Golightly of the New York fashion scene. Her flirty party frocks and whimsical shoe, hat and handbag designs are beloved of the more single-minded female celebrities like Julia Roberts, Courtney Cox and Sarah Jessica Parker. When she is not designing clothes, Cynthia is busy writing books on how to cheat at being stylish – (by putting in the minimum of cost and effort and extracting the most fun). She is the anti Martha Stewart. Her first tome ‘Swell, A Girl’s Guide to the Good Life’, bulges with tips on how to throw dinner parties using bought food – ‘garnish, keep the lights low and throw away the evidence’ is her motto. The book is now being turned into a fashion sit com; sort of an American Ab Fab with Cynthia designing all the clothes. Her second book, for which she is rumored to have received a six figure advance, is titled Home Swell Home (it will be published next May).   The new book exhibits the same Auntie Maime moxie but this time zeroing in on the problem of how to make your home look like a spread from a swanky interiors magazine but without really trying or spending any money.

‘I wanted something I could clean with a broom in five minutes,’ says Cynthia sitting in a bikini and oversize shirt on the porch of her newly purchased 500 square foot weekend shack. For most sophisticated New Yorkers, a steroidally pumped up weekend “cottage” in the Hamptons (think folksy grey shingles, an Olympic size pool and at least 10 bedrooms) is considered de rigeur.   But the string of Hamptons towns on Long Island (which includes Southampton, Easthampton, Bridgehampton and Sag Harbor) usually provides little or no respite from the competitive spirit that fuels most New Yorkers. When Cynthia purchased a million dollar home in Easthampton in the mid 90s, she found the neighbors regularly called up to complain about trivia like her grass being too long. After 6 months of standoffs with the demanding locals and a non stop deluge of high maintenance house guests, she called it quits.

Her new place in Montauk isn’t suitable for anyone fancy she says, meaning anyone in need of an en suite bathroom or any real privacy.   Guests bunk down either in the shiny silver 1969 Airstream trailer parked out back or in a wood shed cum garage which has exposed insulating bags lining the walls like a kind of pop art wallpaper. There is only one very modest indoor bathroom in the whole place and a very rudimentary outdoor shower. Even with such Spartan facilites, Cynthia once managed to sardine nine adults, her 18 month old baby Kit Clementine and a dog into the house for a weekend. ‘We could have slept ten ,’ she says pointing to her 1965 red Ford Galaxie car parked in the driveway, ‘the back seat of the car is the biggest and most comfortable bed in the whole place’.

To Cynthia, the attraction of Montauk is the lack of pretense. ‘In East Hampton and Southampton everything is available. Anyone with money can buy style’. But in Montauk which is the farthest Hampton from Manhattan (a gruelling 3 hour drive, often on single lane roads) there are no designer restaurants, juice bars and sarong shops, there are only blue collar clam bars, surfer pubs and tacky ye olde tourist trap gift shops. This isolation has made the town popular with the more reclusive celebrities like fashion designer Ralph Lauren, singer Paul Simon, artist-film maker Julian Schnabel and playwright Edward Albee. ‘It’s like being on a little island, there is nothing here, so you have to make do’. And of course making do fits perfectly with Cynthia’s ethos.

Unlike most fashion designers who have walk-in wardrobes the size of studio apartments, Cynthia has her clothes in one drawer of a small customised IKEA dresser. ‘How much room do you need for a bikini?’ she says rolling her eyes. It’s not as if she elegantly entertains while weekending in her tiny shack, but even in the city, Cynthia is hardly high maintenance. It takes her five minutes to get dressed for a posh benefit dinner. ‘I have a filing cabinet in my office with a drawer for bags, one for jewelry and one with fake pony tales and wigs. I swear half the time, I have no idea what I look like. The main thing is if I borrow something from the showroom it has to be back by 9am without looking as if it has been worn.’

When Cynthia bought her Montauk house 18 months ago, she had no idea what the interior looked like. She just liked the fact that it is situated 200 yards from the beach and has a modern flavor. ‘From the outside it looks like a Neutra house if you squint and drive by really fast,’ she says with a chuckle. Inside it is really just a single room with a galley kitchen and a corner partitioned off for a sleeping alcove. When she bought it, the house had 8 bunk beds nailed onto the walls. It was evidently being used as a bolt hole for surfers or fishermen and was in a filthy state. But after a little superficial repairing – mostly patching up the combed plywood walls and enlivening the faded paintwork, it felt like a peaceful little Japanese pavilion. A large rolling front glass door slides back shoji-screen-style to blend indoors and out. ‘When you sit in the living room its like you are sitting in a Barneys window display. People see the house and stop by all the time and I will be in my underwear.’ Sure enough surfers on their way to the beach continually drop in to chat or neighbors roll down their car windows and wave. It’s the opposite of the closely guarded compounds of the ultra rich one hour back down the road, where 20 foot high walls of greenery ensure no one sees in or out.

The house does have a designer pedigree, Cynthia discovered recently. She found pictures of it in the catalogue of the 1939 New York World’s Fair where it was exhibited as a prototype for a series of prefabricated ‘sportshacks’ designed by 30s art deco supremo Donald Deskey. Deskey was also responsible for the Crest toothpaste logo and the swooping deco interior of Manhattan’s Radio City Music Hall, a 12-acre complex in Midtown Manhattan, which still hosts rock concerts and other musical events.

The original furnishings of the ‘sportshack’ were fairly minimal – a built in couch and three bunkbeds. For the new interior, Cynthia rounded up a quirky bunch of 40s, 50s and 60s tables, chairs and lights from her favorite resource – local yard sales. ‘I hardly ever pay more than $30 for anything,’ she brags. On days when she isn’t surfing, (her new passion, inspired by watching all the action down the road) she is out touring local neighborhoods in her pick up truck looking for junk and scrap. Sometimes, the oddments she culls on these travels will spark a bit of DIY. Recently she created a set out of outdoor stools from oil drums punched full of holes and filled inside with candles ‘They glow in the dark and keep your butt warm at the same time,’ she says.

Resourceful ingenuity is Cynthia’s trademark whether its clothes, interiors or entertaining. When baby Kit Clementine (nickname ‘Shorty’) was born, the main feature in Cynthia’s 4,000 square foot Manhattan loft was a white wool carpet. Friends scoffed it was impractical and would soon be ruined. But unfazed Cynthia ordered a black off-cut of the same carpet and made a series of round rugs which she now throws down over any unmovable stains, in the process creating an eccentric new polka dot floor design.

Cynthia’s gung ho ingenuity and desire to be top banana in the shock department was honed as a child growing up in small town Illinois in the Mid West. ‘There was no TV, so we made our own entertainment. We built our own tree forts. Our house was like playland,’ she says. To keep three offspring amused her mother would hold theme dinners. ‘She would make cowboy stew which was just stew with hamburger meat in it, but we would eat it out of metal plates wearing cowboy hats and it felt special’.

Doing things for yourself is a dying art in Manhattan where half a milliion dollars is considered a reasonable price to pay your decorator, and most Hamptonites are chauffered out to their country cottages either in the designer coach, the Hampton Jitney or in $7,000-a-trip helicopter rides. By contrast Cynthia runs her life like an adventure project, turning simple tasks into fun experiments having a good time with the minimum of effort and avoiding the obvious and predictable, whether entertaining, dressing or creating a home. Not getting hung up on perfection is the key she says. ‘If its perfect, it’s boring. Anyway anytime I try to make things perfect it all goes horribly awry.’