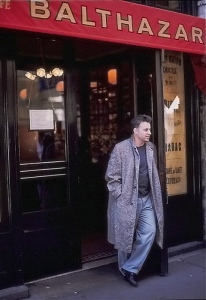 It is testament to Keith McNally’s skill as a restaurateur that in New York where eateries come and go in the blink of an eye, he has launched 11 restaurants in 33 years and all but one are still open (although today he owns 8 of the 10). His first venture, Odeon, which opened in 1980, with its atmospheric film noir decor immediately, became a New York classic. Andy Warhol hung out there and it quickly established TriBeCa as a place to be seen.

His greatest hit, and the restaurant he is bringing to London next month, is Balthazar, a vast Bofinger style brasserie in SoHo. When it first opened in 1997, it received 4,000 calls a day for its 165 tables. The A list – Calvin Klein, Anna Wintour, Sharon Stone, Kate Moss had to fight each other to get in.   ‘Today, we serve 4,500 people a day at all the restaurants combined. It is a luxurious problem to have,’ he says with his signature boyish grin.

Coping with several thousand strangers a day in a restaurant is one thing, but entertaining friends at home fills McNally with horror. ‘Most dinner parties end up in fights with my wife. By the end of the evening, we are totally estranged. I read about these beautiful couples that have effortless dinner parties, but that’s not us.’ He thinks it may have something to do with his childhood, growing up in a working class British family where food and fighting were inextricably linked. ‘We had no TV, so terrific rows at the dinner table were our main form of entertainment.’

He grew up in a family of six in the East End of London. His father was a dockworker and his mother an office cleaner. ‘Expecting mother to select four French cheeses would be like expecting Robinson Crusoe to shop at Gucci’. Most of her dishes were so over cooked, ‘the meat looked like Keith Richards skin on a really bad day’. Going out to restaurants was, ‘an exercise in humiliation. Getting to the table, knowing what do with the silverware and what things meant on the menu, was terrifying’.

Despite his constant protestations about his poor cooking skills and low expectations of dinner parties, McNally and his wife Alina appear to have a lot of fun preparing lunch for friends in their 1841 West Village town house.

Today, the guests include art critic Robert Hughes, who McNally has known since the 70s and who wrote the introduction to the Balthazar cookbook. ‘If we have any plates that are not chipped that would be great!’ McNally shouts over to his assistant, adding. ‘And I think we need a bigger table cloth!’  He has produced a tiny square no bigger than a hanky and plopped it down in the middle of his dining table, a green distressed wood affair surrounded by French café chairs. It is a joke.

What McNally really wants is to have no fuss and no pretension. No table cloth at all in fact and his lunch guests will drink wine out of Duralit glass tumblers. ‘It is a lot less formal,’ he says by way of explanation. ‘Precious food on large plates that is arranged artfully, is not for me. I like good food, but I don’t like a ceremony.’

The lunch preparations started the day before with a trip to Di Paolo’s, a traditional Italian deli that’s been a staple on the Lower East Side since the Twenties. McNally dropped in to buy baratta with truffles (a soft cheese shaped like a gourd and wrapped in banana leaves), which along with peppers, ricotta and toast will be the first course.

Di Paolo sits a few blocks away from McNally’s most recent restaurant Pulino’s Bar and Pizzeria, which is a gaining a reputation for some of the tastiest pizza and meatballs in the city. However, New York food critics almost unanimously prefer McNally’s other new venture, Minetta Tavern, a tiny writers and poets hangout which he re-opened in 2009 and which is now the in place for celebrities who like to feast on mouthwatering steak and $26 black label burgers.

One of the first guests to arrive for McNally’s home-cooked lunch is British TV and radio presenter Kirsty Young, who is a big fan of Balthazar. ‘I just love the theatre of it. It is such a great space,’ she says, lounging in the living room drinking Agrapart brut non vintage champagne and nibbling on chunks of Parmesan from Di Paolo and slivers of finely sliced prosciutto.

The ground floor of McNally’s townhouse is one vast open kitchen/living space. The walls have been plastered in a dense egg-custard plaster that looks like it was applied with a spade. Like his restaurants, every detail of his home is minutely considered. But the result isn’t precious. Quite the opposite, it is designed to look relaxed and is extremely tolerant of mess and disorder. Even his glass-fronted fridge gives a view into joyful chaos, ‘There are chunks of butter from World War 2 and take-out dinners from restaurants that closed four months ago’ he jokes. ‘I don’t care what people think’.

Architect and screenwriter James Sanders turns up next. He is a regular at the McNally’s and says that at the McNallys’ parties guests typically pop in and out through out the evening.  Some come for the hors d’oeuvres and then vanish and others appear at the end. McNally chimes in, ‘I just tell those who can’t make dinner to turn up for desert’.

Lunch starts with a toast to Robert Hughes to thank him for doing the introduction to the Balthazar cookbook. McNally gets up and says; ‘Although Bob’s essay was lovely. We are not using it’. The lunch party erupts in guffaws.

Alina sits at one end of the table and Anna Opitz, co-owner of McNally’s vodka bar Pravda is at the other. The host is perched on a corner, so he won’t dominate the table and so that his bobbing back and forth to the kitchen won’t be too distracting.

The main course of striped bass with tomato and saffron and fennel confit is lifted from his Balthazar cookbook and is, ‘A bit more precious than I would usually do,’ he says.   ‘I usually prefer to cook any dish that makes me appear a better cook than I am,’ he jokes.   A current favorite is combining grilled eggplant, watermelon and tapenade with fresh chevre that he makes from his own goats milk on his farm in Martha’s Vineyard.

When the cake appears, McNally asks who has the nearest birthday and they get to cut it. It is a massive lemon cake soaked in rum, plastered with fresh cream and studded with fruit. It was made in McNally’s bakery in Englewood New Jersey, which produces 7,500 loaves of bread a day, plus pastries and fancy cakes, sometimes for friends and celebrity weddings.

By 4.30pm, both the front and back doors are wide open and the late afternoon sunlight is streaming in. The guests are only just starting to dribble out. ‘It has been a great lunch. You can tell when they don’t get up immediately after the coffee,’ McNally explains. Contrary to his worst fears, there was no postprandial fight with Alina, no embarrassed guests leaving early, no culinary cock-ups. Quite simply, he says. ‘I don’t know why we don’t do this more often.’