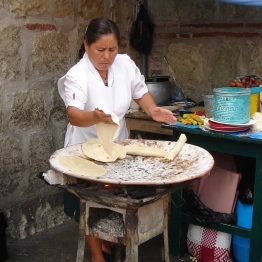 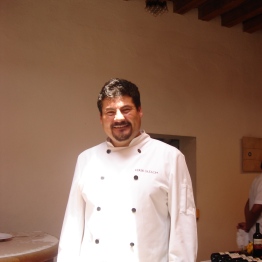 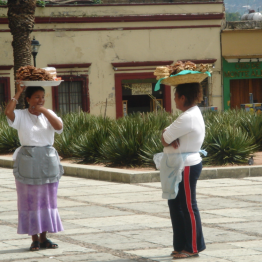 Oaxaca is a food lover’s paradise. The markets in and around this little colonial town, 320 miles south of Mexico City, overflow with exotic produce like cuaginicuil; giant bean pods that look like something out of a fairytale and which hinge open so you can suck out the candyfloss-like foam inside). Then there are pitahayas (a prickly pink fruit with spotted black and white flesh), and jiotilla, mamey, cherimoya, maracuya, guanabana, prickly pear and corn fungus (huitlacoche). The names alone conjure up mouthwatering promises.

The state of Oaxaca (pronounced Wahaka) is one of the most beautiful and untouched regions of Mexico. It is tucked between the Eastern and Western Sierra Madres. The history of the area dates back over 2,600 years to the Zapotecs. Currently it is home to some of Mexico’s finest regional cooking.

Alejandro Ruiz Olmedo is one of the top chefs in Mexico. Over an early morning cup of guava, mint and orange peel tea, in the vine-draped courtyard of his restaurant at the Casa Oaxaca hotel, he explains: ‘Oaxaca is divided into 7 regions. All the locations have different climates. It makes for lots of variety in the produce’.

After breakfast we head to Zaachila, the biggest local market just outside the town of Oaxaca to buy ingredients for a lunch Alejandro is preparing in honor of several local artists and designers. As we approach Zaachila, driving through pecan groves, the road becomes crowded with cows, pigs, sheep and goats. In a nearby field, Mexican cowboys in straw hats are holding bulls and cows by frayed looking ropes. All the animals are so close together, there are constant fracas and it is easy to get kicked or butted. Around the perimeter, women make tortillas on their homemade zinc braziers. Alejandro doesn’t want to stop here. ‘It is impossible to get good red meat in Oaxaca,’ he says. ‘It’s too tough.’ He prefers to work with chicken, turkey duck, rabbit and fresh seafood, which is flown in daily from the coast.

The fruit and vegetable market at Zachilla is the main attraction. As we approach, women flit by with huge flat baskets of breads and cakes balanced on their heads. Local housewives in their floral aprons display their produce on woven mats and colorful cloths on the ground. ‘Some of these women are my relatives,’ says Alejandro hugging two ladies. ‘I grew up in a small town 5km from here and I came here as a child. My family were farmers. We planted avocados, spices, zucchinis, beans, radishes, corn and chilies and we would come here on foot or by bike to sell our produce. I did it from age seven until my mother died when I was 12’.  In a local feud, a bullet – intended for his father, killed his mother instead. After that his father took to drink, and Alejandro the oldest of five children was left to support the family.

‘I made my own cheese to help pay for my studies,’ he says. Neighbors gave him corn and pocket change in exchange for helping in their fields. As a young adult, he waited tables to earn a living, and in his off hours he experimented with cooking. His break came in the late ’90s when he met the owners of the Casa Oaxaca hotel, a little 18th century colonial villa, with just seven rooms. They asked him to wait tables and to serve breakfast.

The owners lived in Germany and for most of the year they left Alejandro in charge. In their absence, he began to dream big. At first he made some minor changes. He started by adding bar food; dishes like squash blossoms stuffed with honey and string cheese. Gradually he became more audacious, telling guests that he could cook them fish anyway they wanted if they stayed for dinner. The owners returned one day in March 2000 and to their surprise they found that the hotel had 20 guests for dinner. ‘It took another year for them to believe it could be a business.’

By the early Aughties, Alejandro had enough customers to serve an elaborate tasting menu to 20 people every night. He also opened a 60 seat restaurant nearby called Casa Oaxaca. More recently he has been approached to open a ritzy restaurant in Mexico City. But leaving his hometown has no appeal. He would rather open a small local bar (the kind of joint chefs frequent in their off hours).

For lunch today, he is preparing one of his most popular dishes; jicama tacos with corn fungus, grasshoppers (chapulines) and string cheese. To Europeans it sounds unpalatable, that is, until you try it. It has a delicious rich creamy texture from the corn fungus and piquancy from the chili-flavored grasshoppers, which are considered a delicacy. ‘In the market they are expensive,’ says Alejandro. ‘1/2 kilo is 100 pesos.’ He prefers catching them by hand. ‘There is a plague of them in the rainy season. You can catch them yourself in the alfalfa fields. It is nice therapy and they are rich in protein. You fry them with olive oil, garlic, onion and jalapeños and a couple of drops of lime juice.’ Foreign guests who turn their nose up at eating insects are reminded of the Oaxaqueno saying that ‘If you sample chapulines you will return to Oaxaca again.’

Corn fungus (huitlacoche) is another farm scourge, which has turned into a luxury item. ‘It is a mutation,’ says Alejandro. ‘There is no corn inside the cob. The corn turns into a blackish mushroom. When I was a child, people threw it away. But I was always happy when I found it. I used to eat it in quesadillas.’ Nowadays restaurant goers in Mexico eagerly await huitlacoche season with the same excitement Europeans reserve for truffles.

Alejandro’s lunch guests include local ceramic artists Alberta Sanchez and her niece Macrina Martinez whose iconic red pottery is highly prized for its hand turned sculptural forms. Macrina and Alberta are wearing their traditional Zapotec costume of shimmery flowered dresses, embroidered aprons and red and yellow satin ribbons woven through their long black braids. For Marcrina, like most Mexicans, ‘la comida’ (lunch) is the most important meal of the day. ‘All the family comes together and cooks something special.’

Mexican chocolate tastes nothing like the chocolate traditionally sold in Europe or America. Villagers here grind up pure 100% raw cocoa beans themselves, adding almonds, cinnamon and spices to the mix. Then a little hot milk is added to make a frothy bittersweet brew. Chocolate, once used as currency among the Aztec people, is a key ingredient in mole, a rich luscious savory sauce full of herbs, nuts, fruits and spices. Legend has it a Dominican nun invented the dish when she discovered the magical flavor chocolate imparted to her stew of pureed roast chili and other spices.

Mole is the star dish of today’s lunch. Making it is an all-day process. It is not for the faint hearted. The list of ingredients can make you feel as if you are scaling the culinary equivalent of the Sierra Madres. There are 7 recognized local moles, some require 100 ingredients (and the prep time is about the same as it would take to fly from New York to Oaxaca). But the result is usually spectacular , a rich multi layered sauce that shimmers with shadowed flavors.

Alejandro recommends you start the day before you plan to eat it, especially if you are preparing it for a dinner party. Mole always tastes better the second day. He also suggests that you make an enormous batch, which you can keep in the freezer for future occasions. ‘Most people in Oaxaca eat it twice a week,’ he says.

As a 7 year old, Alejandro helped his mother make mole. But in Alejandro’s restaurant, he has a special mole chef whom he refers to as Mrs. Georgina. Most of Mexico’s restaurants are staffed by women. ‘The best mole you have is made by someone’s mum or grandma. Women are taught the recipe by their mothers.’ Today Mrs. Georgina is making a Mole Coloradito (which means little red mole) to be served in the traditional way with chicken and rice (pork and rice is another popular option). Alejandro sometimes likes to pair mole with duck, lamb or rabbit. Macrina and Alberta say they like to serve their mole with black beans and cactus leaves.

There is very little equipment in Alejandro’s kitchen. The mole is cooked in large red pots (made by Macrina and Alberta). On one counter is a small wooden tortilla press, which looks like a mini printing press. Fresh tortillas are a local religion. Alejandro’s mother got up at 5am everyday to grind corn and make tortillas. ‘My grandfather wouldn’t eat if there weren’t fresh,’ he says.

Today’s meal starts with a hearty fava bean and shrimp soup. ‘It is a whole meal, ‘ says Alejandro putting a spoon in to the soup to taste it. It is traditionally served with chili relenos or salty cold fish. As talk turns to art and as the hours pass, the mole coloradito arrives and with every bite it seems to mellow the mood. However, the greatest hush descends over the table when the desert arrives. It is a gourmet Zapotec dish called Nicuatole. ‘It is pre-Columbian,’ says Alejandro proudly as he presents the set desert made with blue corn, condensed milk, cinnamon, sugar and lime zest. It is typically served with tropical fruit. And today is no exception. Alejandro is using the exotic pink pitahaya and the white foam from inside the Cauginicuil pods that he collected at the Zaachila market.

By 5pm lunch is winding down. Graciela and Claudina plan to take naps before returning to their gallery. Macrina suddenly produces a cell phone to summon her driver to return to their rural studio. Alejandro pushes back his chair and sips on a pineapple and alfalfa water juice. ‘Internationally people talk about the slow food movement. But here people laugh at the idea. Our food has always been slow.’ And that is just the way everyone likes it.